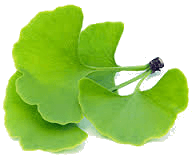 There seems to be no other plant in herbal medicine that is beneficial to the brain, central nervous system and vascular system at the same time. Anyone over 50 is encouraged to take ginkgo extract for a few months at a time for the general toning up of various bodily functions and to improve peripheral circulation.

There are a number of exciting and beneficial side-effects from regular ingestion of ginkgo biloba because of the number of complaints that are caused by poor circulation. Some patients have reported drastic eyesight restoration as well as improved hearing and, of course, re-establishing memory — all because the blood vessels are widened and that particular part of the body, along with increased blood flow, is receiving extra oxygen. For this reason, ginkgo biloba is being extensively tested in the battle against Alzheimer’s disease.

As mental cognitive functions in adults tend to decline with age, absentmindedness, poor concentration and mental loss is often associated with age-related degeneration. Restricted circulation to extremities such as hands and feet is also a common complaint.

Ginkgo biloba is an ideal tonic for the elderly as it can help them to think clearly.

In an ageing population, reports of the ginkgo’s ability to counter the effects of ageing

are being received with great enthusiasm. Ingesting the Ginkgo extract* made from the leaves brings about a vasodilatory effect which is particularly useful when you consider a lot of the problems of ageing are to do with diminished blood flow to the body’s extremities, including the head. This same vasodilator tendency is also very useful in countering the effects of long-term smoking where nicotine contributes considerably to vascular constriction.

The Chinese have long claimed the leaves of the ginkgo contain medicinal properties that can cure the common cold very quickly and that these properties are also effective in relieving sinus congestion, stubborn coughs and asthma. For these applications a vapour made from the leaves is considered best. Small scale German studies have backed up Chinese claims that ginkgo works with “staggering” speed to counter colds.

Ginkgo biloba was thought to be extinct until it was “discovered” in the courtyard of a Chinese temple a few hundred years ago. Apparently the Chinese incorporated this very beautiful tree in its ancient practice of ancestral worship. Whatever the reasons for its survival, we should be grateful it did survive and modern scientists are only today redefining the medicinal value of this mystical plant.

The ginkgo tree is also known by the name of the maidenhair tree. It is a deciduous, broad leaf tree. Ginkgo trees can reach 50 to 80 feet in height. The leaves of the tree start off green but turn gold in the autumn.The resilience of ginkgo is borne out by the tales of how this tree survived even the atom bomb dropped on Nagasaki towards the end of World War II. For me, it tells how effectively the ginkgo deals with the excesses of modern pollution and how effective it should prove in helping humans deal with their polluted atmosphere.

Mix all herbs into a bowl and then store them in a sealed glass jar away from sunlight. Infuse one heaped teaspoonful of the mixed herbs and pour 1 cup of boiling water over them. Cover the cup with a lid or saucer—this ensures that the volatile oils in many medicinal herbs do not escape into the air. Allow the mixture to steep for 3–5 minutes and strain before using, drink 3-4 cups daily.

If not using straight away, you can store an infusion in a covered jug or container in the fridge for up to 24 hours and gently warm the mixture before drinking.

*Ginkgo biloba is not recommended in cases of high blood pressure and it may increase the risk of bleeding if taken with anticoagulants.

Learn more about the nervous system, the organs of sense, along with their functions, related disorders and treatment. Enrol in our Nervous System & Sensory Organs Lesson 7 today!