A Valuable Remedy For Throat/Mouth Complaints

Sage or salvia officinalis, as it is scientifically called, has been used in traditional medicine for centuries and is a valuable remedy for throat/mouth problems, intestinal/digestion complaints and menopausal hot flushes, to name just a few.

It is a native to Southern Europe and the Mediterranean region, where the leaves of this small evergreen, perennial plant are used as a popular culinary herb. Sage oil is extracted by distillation from its dried leaves and the leaves make a soothing cup of tea which provides many health benefits.

Sage is associated with wisdom and it is a wise person who takes heed of this herb.

In his book: The Breuss Cancer Cure, Austrian healer Rudolf Breuss has this to say:“I class Sage tea as the most important of all the teas, it should be drunk throughout your life. It wasn’t for nothing that a Roman scientist wrote ‘Why die when Sage is grown in your garden’. By that he meant, of course, why die young.”

From being all things to all people, including a panacea for immortality as well as an aphrodisiac, sage has evolved into its present position as a meat preservative for the same reasons that rosemary is such an effective preservative. Sage also has a host of medicinal uses.

Sage is a strong antiseptic and is particularly potent against staphylococcus infections.

Used as a gargle, its antiseptic property makes sage one of the best remedies for:

Many children and adults could have saved themselves a tonsillectomy had they taken sage, as the phenolic acids it contains are antibacterial. 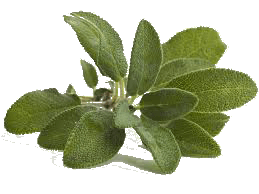 Sage is also an excellent remedy for loose and bleeding teeth, and for ulcerated or receding gums.

Sage’s volatile oil gives it both a carminative and stimulating effect on the digestive system.

Sage removes mucus from the respiratory organs and stomach, as well as relieving intestinal troubles and mild diarrhoea.

It is a valuable agent in the battle against liver complaints, it strengthens the nerves and can be used to combat cramps, trembling of the limbs and nervous excitement.

Sage has also proved itself as a blood cleanser and a valuable carminative to relieve dyspepsia, and as a fomentation, it promotes the healing of wounds.

Sage has oestrogenic properties, making it most beneficial during menopause.

Due to sage’s oestrogenic properties, it is most useful in countering night sweats and hot flushes during menopause.

It relieves painful menstrual periods and helps to stop breast milk production in mothers who are ready to finish breastfeeding.

Please note that sage stimulates the muscles of the uterus, so it should be avoided during pregnancy.