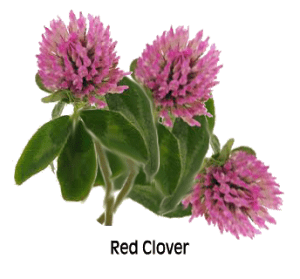 Red clover tea (Trifolium pratense) has a strong metallic flavour as a result of its high concentration of iron and copper salts, which make it a vital blood tonic as well as an important blood cleanser. If taken over a prolonged period, red clover will improve the blood’s haemoglobin levels and the size and number of blood platelets.

Red clover’s blood cleansing properties mean that it has many uses for conditions that affect organs of elimination—–the lungs, kidneys, bowel and skin. The herb has a strong antispasmodic action on whooping cough and other troublesome coughs, and is useful for asthma, hoarseness and colds. Red clover also contains oestrogen-like compounds and may be helpful in relieving menopausal symptoms.

The herb has been widely investigated for its anti-tumour compounds

that may play a role in preventing and/or treating breast cancer. Red clover is an ideal herbal remedy for children, especially for treating eczema and other skin problems.

Red clover is an herb that has become steeped in controversy over whether or not it is a cure for cancer. It is regarded as such in more than 30 countries and recent studies in America (where it is discounted as a cancer cure) have shown that red clover contains four anti-tumour compounds plus the antioxidant chemical ‘tocopherol’ which has been shown to prevent breast cancer in animals.

Based on its traditional use for cancer, researchers have begun to study the role of isoflavones from red clover in cancer prevention and treatment. Preliminary evidence suggests these isoflavones may stop cancer cells from growing or kill cancer cells in test tubes. Researchers theorise that red clover may help prevent some forms of cancer, such as prostate and endometrial cancer.

Red clover is one of the most useful remedies for children

and may be safely given in cases of eczema and other skin problems. It is quietening to the nerves and has a strong antispasmodic effect on whooping cough and other disorders of the respiratory organs, such as irritation of the vocal cords, windpipe and bronchial tubes. It is good for asthma, hoarseness and colds.

Mix all herbs into a bowl and then store them in a sealed glass jar away from sunlight.

Prepare the tea as a hot infusion.

Wanting to learn more about the human framework and its primary function to support the body? Enrol in our Musculo-Skeletal Systems and Skin Complaints Lesson 9 today!