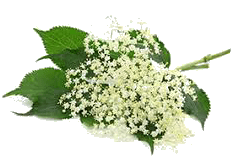 Elder flower (Sambucus nigra) has been used in traditional medicine all over the world in many different cultures due to its antiseptic and anti-inflammatory properties. The most common uses are for colds and flu, sinus infections, and other respiratory disturbances.

A cup of hot, elder flower tea is sweat-inducing and is ideal for

As an oral rinse, elder flower can be used for its antiseptic properties

A hot infusion of the flowers can be used as an eye wash for conjunctivitis. It is soothing and comforting to apply to sore eyes after a day’s work. A side-benefit is the astringent quality means to improves skin tone and function, removing the odd wrinkle.

If you suffer from influenza, drink three cups a day of the following recipe:

Mix all herbs into a bowl and then store them in a sealed glass jar away from sunlight. Infuse one heaped teaspoonful of the mixed herbs and pour 1 cup of boiling water over them. Cover the cup with a lid or saucer—this ensures that the volatile oils in many medicinal herbs do not escape into the air. Allow the mixture to steep for 3–5 minutes and strain before using. If not using straight away, you can store an infusion in a covered jug or container in the fridge for up to 24 hours and gently warm the mixture before drinking.

All parts of the plant are used, from root to berries and bark although but only the flowers are considered safe for internal use. The bark, leaves and berries should not be used for experimentation by amateurs and as can be nauseating and even toxic.

The elder is steeped in herbal history, being credited with more power than perhaps is justified.

In the England of between 400 and 500 years ago, the elder was grown outside homes as a barrier against evil spirits and it was used copiously in funeral rites to protect the recently released soul from the clutches of the devil.

Such function is purely symbolic, with the hearse whip (used in horse-drawn hearses) being made from elder wood. However, even though its place in herbal medicine is not quite as august as it once was (a 1644 publication, The Anatomie of the Elder by Martin Bockwich listed 70 different diseases cured by elder) it is still one of the most versatile plants at the herbalist’s disposal.

The role of elder in the constant battle to stay slim was recognized as far back as the 16th Century when the famed herbalist Gerard claimed of elder: “It is good for such that are too fat and would faine to be leaner.”

Some modern herbalists have maintained the tradition and often prescribe elder in combination with other herbs for those who want to lose weight, under which circumstances it is recommended for its diuretic and laxative effect.

Learn more about the powerful healing properties of herbs used in herbal medicine in relation to health and common diseases. Enrol in ASOHM’s Health and Disease Lesson 2 and get started with us today!