Our kidneys suffer badly from our modern habits

as many don’t drink enough water while consuming large quantities of coffee and fizzy drinks. 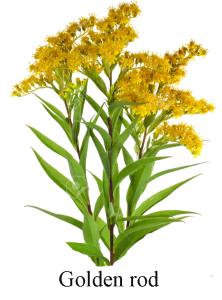 Golden rod (Solidago virgaurea) is not only useful as

but because of its wide variety of actions, it has a multitude of other uses, such as in the treatment of

Its detergent action, which cleans out the bladder and kidneys, can also be used with great effect in the treatment of arthritis and eczema.

The name Solidago means ‘to make whole’. It is reported that Golden rod was already used in the 15th and 16th Century in Europe where it was used topically for wound healing but in modern times the main use of it is to help maintain the health of the urinary tract.

As a gargle, Golden rod can be used in laryngitis and pharyngitis,

while, with American Indians, Golden rod has a reputation as a healer of upper respiratory catarrh.

Birch tea is a powerful diuretic capable of dissolving kidney and bladder stones while at the same time killing off harmful bacteria in the kidneys and urinary tract. It should be used in the treatment of cystitis and other urinary tract infections.

Birch tea can be used to treat fluid retention as it will remove excess water from the body which may have accumulated through heart or kidney disorders.

Because of its diuretic and cleansing activities, birch is often found in herbal slimming preparations.

To treat kidney and bladder disorders, the following mixture of golden rod and birch would be suitable:

Place the weighed herbs into a bowl, mix them well and then store in a sealed glass jar away from sunlight.

Prepare the tea as a hot infusion and 3-4 cups daily.

Learn about different herbs and their individual unique remedies in our Fundamentals of Herbal Medicine Lesson – enrol with us today!