Willow bark (Salix alba) has often been regarded as one of nature’s greatest gifts to humanity because the salicin it contains is such an effective pain killer. The chemical factory that is the human body converts salicin into salicylic acid which is rich in anti-inflammatory properties. 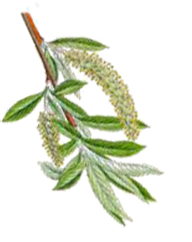 Willow bark is especially useful in the treatment of

It can be used internally and externally, and is good for the treatment of

In spite of cortisone and other modern medications, salicylic acid is still the most important remedy in rheumatoid arthritis and other connective tissue disorders characterised by inflammatory changes. Apart from its anti-inflammatory action, salicylic acid also contains fever-reducing, analgesic, antiseptic and astringent properties.

Modern laboratory tests have shown that salicin inhibits and even destroys bacteria and other organisms due to its antibiotic actions.

Old herbals credit the American Indians as being the first people to use the bark of the willow tree for medicinal purposes. Many tribes prepared decoctions of the bark and used the brew to reduce fever and the relieve the aches and pains of rheumatism. Hippocrates, Galen, Pliny the Elder and others knew willow bark could ease aches and pains and reduce fevers and it has long been used in Europe and China for the treatment of these conditions.

The first “clinical trial” was reported by Reverend Edward Stone, a vicar from Chipping Norton in Oxfordshire, England, in 1763 with a successful treatment of malarial fever with the willow bark. Reverend Stone, heard of the success the Indians were having with the use of willow bark tea. He tried the decoction on the local settlers who were suffering from rheumatism and found that the tea effectively relieved pains

Interested in learning more about other similar pain relieving herbs? Enrol in our Musclo-Skeletal Systems and Skin Complaints Lesson 9 and learn about its functions, disorders and treatment today!