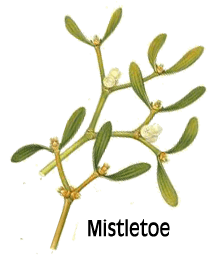 Today, mistletoe (Viscum album) is still a very important ingredient in herbal medicine. It is used to strengthen the heart, to reduce high blood pressure and it is considered one of the best remedies for heart and circulatory complaints. It is also recommended for side-effects of abnormal blood pressure, such as blood rushing to the head, dizziness, buzzing in the ears and visual defects.

can protect themselves by taking 2-3 cups of mistletoe tea daily.

The history of mistletoe, as a recorded treatment for epilepsy, goes back almost 300 years and, as well as being considered a specific remedy for this condition, was also employed to counter convulsions, delirium, hysteria, neuralgia, nervous debility, urinary disorders, heart disease and other complaints arising from a weakened state of the nervous system.

Women going through menopause would be well advised to drink mistletoe which, by normalising circulation, counters hot flushes, feelings of anxiety and palpitation of the heart. Mistletoe can also be used to stem the flow of blood both internally and externally, and  I believe it will be once more accepted as a remedy for epilepsy.

therapies in people with cancer. In certain European countries, preparations made from European mistletoe are among the most prescribed drugs for patients with cancer.

Mistletoe is a parasitic plant that grows on several types of common trees such as apple, oak, pine, and elm. Mistletoe extract has been used since ancient times to treat many ailments.

While mistletoe gave birth to the modern tradition of kissing under it at Christmas (a practice established long before the advent of Christ) it should not be mistaken for holly, which is sometimes wrongly called mistletoe.

Remember, mistletoe should always be made as a cold infusion as heat destroys the plant’s medicinal properties.

For a weak heart the following recipe is suitable:

Prepare the mixed herbs as a cold infusion and drink one cup before breakfast and one cup in the evening.