Valerian Is A Powerful, Natural Sedative

Do you suffer from insomnia, tossing from side to side at night

and finally, because you know of no other way in your predicament, reach for a sleeping pill? If your answer is “yes” and you continue using such help, you will find that in the long run you won’t be able to do without it. Don’t forget that drugs destroy the body’s ability to react and respond in a natural way and the continued use has a destructive effect that can be far-reaching.

that is included in more than 100 over-the-counter sleeping drugs that are manufactured and available in several countries but unlike its chemical counterpart, valium, it may be taken without a person developing a dependence for the substance. 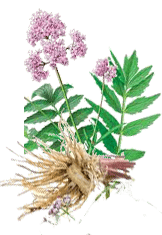 A valerian-induced sleep enables a person to wake up without any hangover. A final point in this debate is the fact that pregnant women who have taken valium, run an increased risk of having children with cleft palates while valerian has not been linked to birth defects.

Not surprisingly, valerian can been used as a sedative in all sorts of nervous conditions such as insomnia, anxiety, hysteria, migraines, palpitations, neurasthenia and breathlessness.

As an antispasmodic, it is an excellent remedy for nervous dyspepsia and stomach cramps. If taken with camomile it is and effective remedy for irritable bowel syndrome. Valerian can be used for painful menstruation and in case of menstrual cramp. Together with mistletoe it is of value in epilepsy and high blood pressure.

The following recipe is taken from an old herbal and is beneficial for:

Place all the weighed into a bowl, mix them well and then store in a sealed glass jar away from sunlight. Prepare as a hot infusion and drink 2-3 cups daily.

Valerian has a terrible smell which cats and rats find irresistible. The Pied Piper who lured away rats from Hamelin in the 13th Century achieved his feat not through music, as later versions of the story might have you believe, but by rubbing himself with valerian in order to lure the rats to their doom. When he returned, payment was refused, so he retaliated by drugging the children with valerian before making off with them.

Maintaining a healthy sleeping schedule is an important factor when trying to keep your body and health at its best. To learn more about sleep, its affect on mood, sexual function, and overall growth and development, join our Endocrine and Reproductive Systems Lesson 8 today!