Sebastian Kneipp – The ‘Helper of Mankind’ 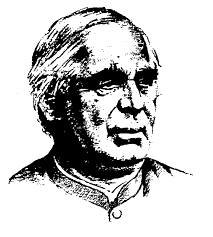 Sebastian Kneipp (1821 – 1897) was an extraordinary man who took an absolutely free product – water – and showed the world how to use it as a curative force for a wide variety of illnesses.

The story of his famous water treatments began when Kneipp was struck down with tuberculosis and left for dead.

There was no cure for consumption in the mid-nineteenth century, but the sickly Kneipp read a book written by the “Water Doctor”, Johann Hann, and followed the methods prescribed to try and cure his disease. Three times a week he jumped into the icy cold water of the Danube to stimulate his own immune system until he recovered completely!

Now, this method of treating disease may seem a bit hocus-pocus to some people, but Kneipp was convinced of the remedial power of water.

He refined the treatment and cured the sick and poor through the villages of Germany,

especially during a cholera epidemic where many who would have died, were saved through his “water-cure”.

Kneipp’s book ‘Meine Wasserkur’ (My Water Cure) was published in 1886 with many subsequent editions, and translated into many languages. He also wrote ‘Thus Shalt Thou Live’— ‘My Will’ and ‘The Care of Children In Sickness and In Health.’

His patients now were more than the motley collection of the destitute and included Archdukes and crowned heads of state. He even had an audience with the Pope who was interested in his treatments. But it was when he cured the Archduke of Austria in 1892, that Kneipp realised his dream and found the financial backing he needed to open his first water-cure centre.

Kneipp therapy is based on stimulating, fortifying and training the immune system.

Kneipp devised 120 different types of water applications which could be prepared in cold, warm or hot form, and developed a wide array of baths, wraps, applications and compresses to be used according to particular requirements. In addition to these, he had also developed his own herbal healing therapy with teas, tinctures and bath additives derived from herbs.

Today, Kneipp therapy is recognized by mainstream scientific medicine in Germany and represents the core of natural, holistic medicine. Doctors at universities in Berlin and Zurich are trained in Kneipp therapy.

In Germany there are more than 550 Kneipp Associations and more than 50 Kneipp Cure resorts that practice his theories and treatments. 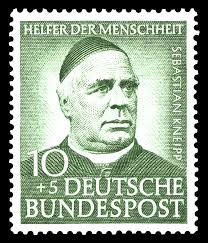 The writings of Sebastian Kneipp still hold true today. Everybody wants to be healthy and live longer but very few people actually do something about it. If only people would devote half as much attention towards remaining healthy and leading a sensible life as they do today in order to become sick, then they would be saved from half of the diseases that they suffer from.” His general rules were early to bed and early to rise, with a walk in the dewy grass in bare feet, simple meals, no stimulants, not too much meat, and an abundance of cereals.

‘Helper of Mankind’ was printed on a postage stamp that was named after him.

One of his popular quotes was:

“Those who do not find time every day for health, must sacrifice a lot of time one day for illness”.

Interested in the various concepts of health and disease? Learn all that and more, along with different approaches to the treatment of human disorders in our Health and Disease Lesson 2. Enrol with us today!