Yarrow has an important place in the history of herbs. 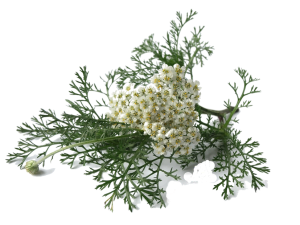 It has two agents which promote blood coagulation, several which have anti-inflammatory and pain-relieving action, and others which are antiseptic.

As well as healing internal and external wounds, yarrow

Through its blood cleansing action,

it stimulates blood renewal with a beneficial effect on the bone marrow. Douche applications or sitz baths will combat

For the common cold and fevers, yarrow is one of the best-known remedies recorded.

If you suffer from menopausal disorders

Mix all herbs into a bowl and then store them in a sealed glass jar away from sunlight. Infuse one heaped teaspoonful of the mixed herbs and pour 1 cup of boiling water over them. Cover the cup with a lid or saucer—this ensures that the volatile oils in many medicinal herbs do not escape into the air. Allow the mixture to steep for 3–5 minutes and strain before using. If not using straight away, you can store an infusion in a covered jug or container in the fridge for up to 24 hours and gently warm the mixture before drinking.

Yarrow has a colourful place in the history of herbs. Archaeologists have discovered fossils of yarrow pollen in ancient burial caves making it the oldest evidence of human interaction with herbs, although common sense tells us the human relationship with herbs is as old as Adam – literally! The story behind the herb’s botanical name Achillea links it with Achilles who apparently used yarrow to heal the wounds of his comrades during the siege of Troy, before an arrow in his heel made a legend of him. However, the more likely and less romantic truth, is that yarrow’s botanical name was attributed to a Greek doctor who recorded details of the plant and whose name was also Achilles. Whatever the truth behind the naming of yarrow, what is undeniable is that it really does work as a treatment for wounds. It has two agents which promote blood coagulation, several which have an anti-inflammatory and pain-relieving action, and several others which are antiseptic.

ASOHM encourages our students to to gain a keen sense of curiosity about their bodies, including the endocrine and reproductive systems. Enrol in our Endocrine & Reproductive Systems Lesson 8 today!